Casely: How One Brother and Sister Duo Found Authentic Success on Their Own Terms 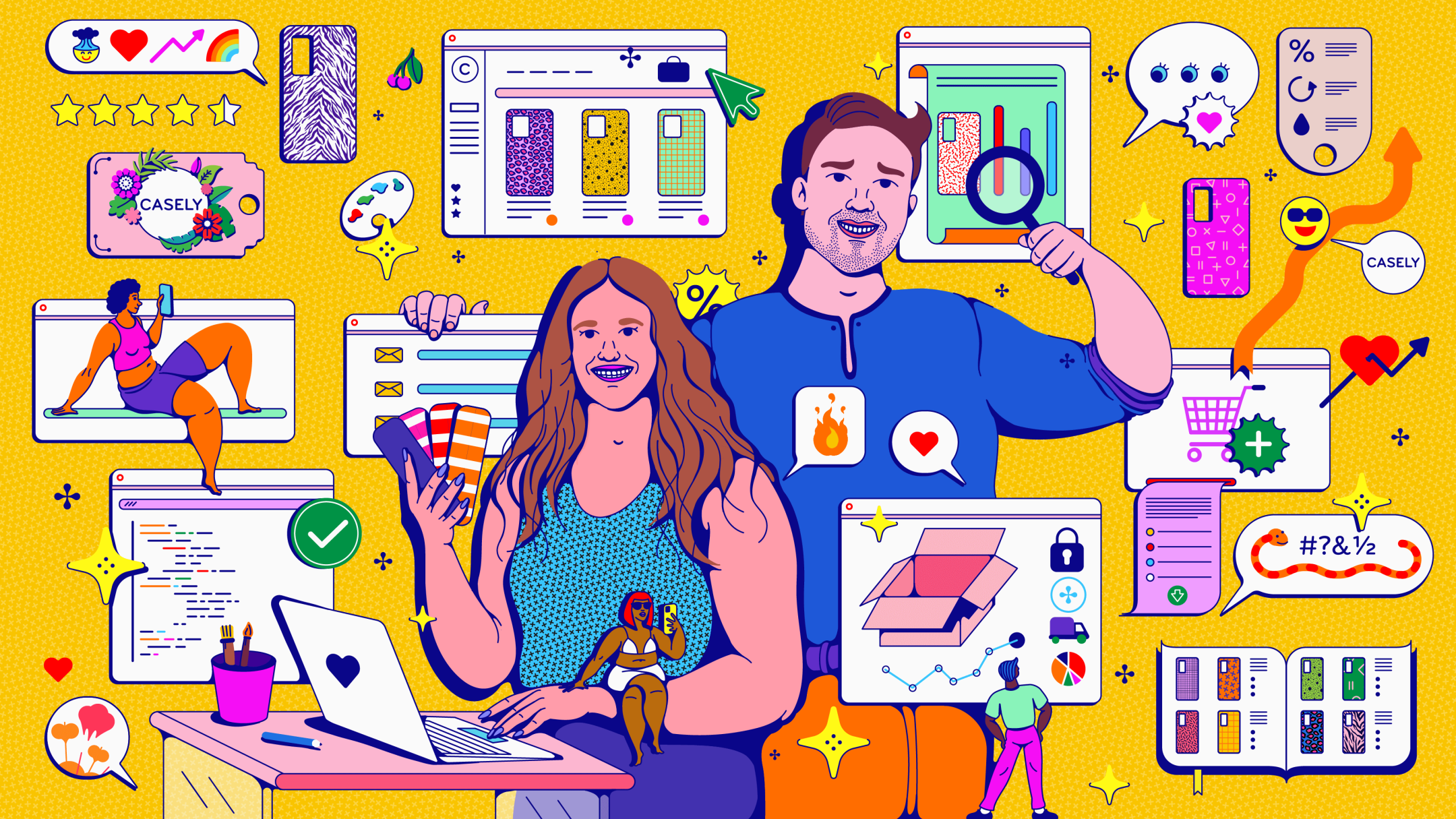 Consumers increasingly want to spend their hard-earned money with businesses that align with their values and have a positive environmental and social impact.

According to the Shopify eCommerce Market Credibility Study, consumers are four times more likely to purchase from a company with strong brand values, and 77% are concerned about the environmental impact of the products they buy.

In today’s e-commerce environment, it’s clear companies can do well by doing good, but these efforts have to be authentic to their brand. Emily and Mark Stallings, a brother and sister duo who co-founded Casely, a Brooklyn-based tech accessories company, have made sustainability and giving back a core part of their mission.

Through their bold designs and curated shopping experience powered by Shopify, Emily and Mark have built a thriving business from the ground up—with Emily even learning how to code specifically to build Casely’s eye-catching, customer-friendly website. The Stallings have demonstrated over and over again that with a little ingenuity, lots of guts and a willingness to learn, you can create a profitable, purpose-led business and make a difference while having a blast.

Making the leap into entrepreneurship

When he was 13, Mark started selling products on Amazon and eBay, turning his bedroom into a small warehouse and learning to make connections overseas with manufacturers. At 16, he scaled to start his first Fulfilled by Amazon (FBA) business. He successfully sold the business two years later and eventually used the money to bootstrap Casely.

Mark says the idea for Casely came about after he went back to school, decided it wasn’t a fit for him and sought the right opportunity to get back into entrepreneurship.

“I came across tech accessories, which is probably one of the most saturated niches available, but I really saw a hole in the market,” Mark says. "There were some companies coming around that were dropping new designs and using the back of a phone case as a canvas. My sister has a background in design and I knew I could tap into that.” Mark approached his sister, Emily, about starting the first ever phone case subscription company that would send consumers a new case every month or season, and essentially allow them to “use their phone as an accessory to their wardrobe,” Mark says.

Casely, which launched in 2017, initially focused on subscriptions but Mark and Emily eventually realized they also needed a digital storefront to drive more business.

Get the latest ecommerce trends, insights and resources straight to your inbox

Emily says when she and Mark started Casely, she had minimal knowledge about how to create a website.

“I had one 7th grade web design class under my belt,” she jokes.

Since Mark was in charge of the business and operations side of the house, Emily handled all things technical and creative, which included the website. She built Casely’s first website with an easy-to-use template, leaning on an online community of fellow business owners and nascent developers to create Casely’s first digital storefront.

At the time, Casely had many SKUs in its catalog, so it also needed to create a user-friendly web experience for customers that was easy to organize and manage on the backend. Using an end-to-end ecommerce platform allowed Casely to accomplish both goals. The company has adopted several tools to craft a curated shopping experience, with a loyalty and referral program, subscription club, reviews, and more all seamlessly integrated into its website. Casely’s site is filled with user generated content (UGC), colorful graphics, hover animations, and quirky language, which enables the company to easily cultivate and share its unique brand story and product offerings with customers. With a more powerful, more secure backend infrastructure, Casely can also better manage its inventory and minimize stock-outs.

“We only oversold about a hundred orders last year, and we did close to 500,000+ orders,” Mark says. “That's really just due to the back end and the ability to let us run a business that's as complex as ours.”

Using its website to optimize the shopper journey has allowed Casely to scale quickly and accelerate the business' growth. Casely now has over 5,000 SKUs in its catalog and nearly 7,000 paying subscribers. The company experienced 1,700% growth from 2017-2020. In 2021, Casely had $22 million in revenue and is on track to do $40-42 million this year, Mark says. Those numbers are impressive on its face, but are even more astounding when you consider that Casely is a family-run business with just five full-time employees.

Casely became profitable a year and half after its launch, which paved the way for it to focus on two other important goals: charity and sustainability.

“Our charity and sustainability goals have definitely evolved over time," Emily says. "We always knew we wanted to pair our business with some sort of charitable aspect, but knew we couldn’t do that until we became profitable."

After Hurricane Florence hit Emily and Mark’s hometown in North Carolina, they decided Casely would make a donation to support the disaster recovery effort. After Casely’s initial donation, it received a flood of customer messages asking the company to support their chosen charity next. In response, Casely decided to launch a charitable initiative in 2018 called #EveryCaseCounts, where the company donates a portion of its sales from every product to a different charity each month. Customers can nominate charitable organizations, which allows Casely to more deeply engage them in the company’s mission to give back. So far, Casely has donated over $500,000 to more than 30 charities, including The Trevor Project, Black Girls Code, City Harvest and the National Alliance on Mental Illness.

The company also has a sustainability mission. From day one, Casely has made its cases with 50% recycled materials and printed dyes that are non-hazardous, non-toxic, and eco-friendly. In the last year, it has also adopted biodegradable and compostable eco-friendly packaging. As of April 2022, all of Casely’s products are now carbon-neutral. With its carbon offsets, Casely is also funding tree planting, wind energy, and clean water projects through ClimatePartner, an organization focused on climate action.

“We're doing everything," Mark says. "From inside the office to products to shipping, sustainability is number one."

Starting a business hasn’t been easy, but the Stallings have been driven by purpose and have learned a lot along the way. Emily says any aspiring entrepreneur who wants to start a successful online DTC business today should absorb all the information they can and then not be afraid to make the leap.

“Trial and error even your craziest ideas, because taking action is key,” she says. “Don’t outsource until you reach a roadblock yourself or can afford to do so. Figure out your brand’s unique personality and voice and embody that in everything you do.”

By using the right tools and technology, Casely has been able to embody its own unique brand voice, better serve its customers, and live its brand values. However, the company is just getting started. Mark says, “our goal as a brand is to really be a case for everything.”

But even more than that, he says, “We don't want to just be a phone case company. There's a lot more to what we do. We want to empower [people] and allow people to understand that you’re buying into something special—it’s not just that you’re buying this product.”