When French Metro’s website crashed, Alexander Hunt saw it as a “fortuitous” turn of events.

Strange? Perhaps for a website builder. But Hunt saw it as chance to breathe new life into the antique shop he loved so much.

He’d been trying to convince his parents, the owners of French Metro Antiques, to replace their outdated website, which hadn’t seen the light of an update for a few years.

But the couple was dragging their feet. They had already discussed revamping the site a few time over, but were waiting for the right time.

“Nobody likes to dig into that type of project,” Hunt explained. “So, when the site crashed, it was like, ‘Okay guys, now you have to build a new website.’”

Despite living thousands of miles away in India, Hunt jumped at the opportunity and brought on his partner and digital brander Udhara De Silva; the two hatched a plan to professionally pitch his parents.

“We went through the same process any other digital agency would go through,” De Silva explained. “Because French Metro had certain customizations necessary for the kinds of transactions they do, the way they quote, and the way they do shipping quotes, we had to do a lot of background research to figure out exactly what they needed before we could settle on Shopify.”

While the pair were treated like any other team vying for a client’s business, their competitive edge was Hunt’s intimate knowledge of the business. They won the contract and worked remotely to reimagine French Metro, capturing the elegance and tradition of the bricks and mortar store, but also helping the business further capitalize on its unique and growing online presence. 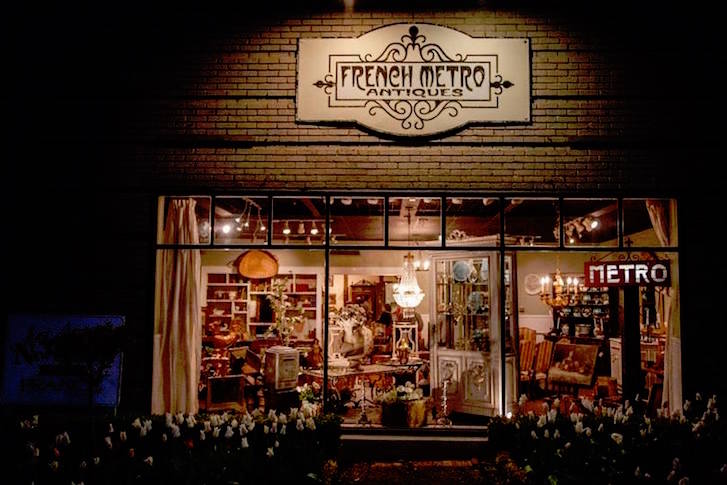 Located in Fayetteville, Arkansas, French Metro imports one-of-a-kind French antiques that range from the 17th century to the 1930s art deco period. It’s a family business, run primarily by Hunt’s mother, who speaks fluent French, and father, who is well-versed in art history and a talented woodworker.

Opened in 1999, the business largely revolves around annual pilgrimages to France; the goal is to find the finest in French antiques and over the years, the business has grown in clients, products, and quality.

“It’s unique among other antique stores because French Metro hand selects each and every piece,” Hunt explained.

Over the past decade, French Metro has acquired national and international clients who increasingly buy antiques through their online store. Roughly, 40 per cent of sales are made online, and the owners wanted to ramp up that side of the business even further; their new goal is to hit 50 per cent digital sales.

With such a unique stock of products sold both online and offline, and owners who are out of the country roughly three months of the year, finding one system to streamline their online and offline sales was the biggest challenge for Hunt and De Silva.

POS to the rescue

Despite French Metro’s organic growth in digital customers, the antique shop was a bit stuck in old school ways; the owners were still doing transactions by hand.

“We always just used paper,” Hunt said with a chuckle. “Because the average sales price is quite high, you might only have one or two sales a day, so it made sense to use paper.”

Able to accept any type of payment with no training necessary, the solution was perfect for the store owners, who could easily keep an eye on inventory from anywhere.

“My parents are in France on a buying trip right now, their employees are in the shop making sales, and they’re able to keep a pulse of what’s going on in the business using their iPhones, which is incredible.” 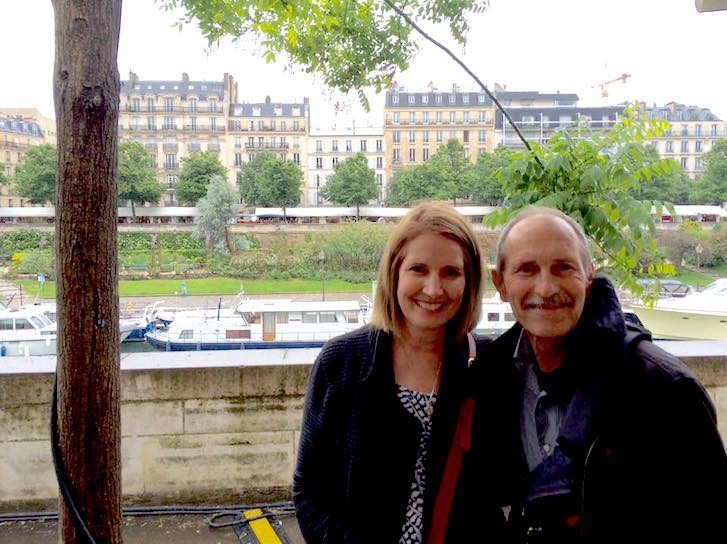 Hunt and De Silva added a retail package to their POS subscription, which integrated French Metro’s online and in-store sales, automatically updating their inventory in real time. This was especially important for French Metro, which only sells one of everything. Often when the owners return from a buying trip, they have customers waiting at the door — some would even fly in for the event, and many would wait with bated breath online.

If somebody bought something in the store, employees couldn’t get to the website fast enough to show that it was sold.

“If somebody bought something in the store, employees couldn’t get to the website fast enough to show that it was sold,” Hunt explained.

The uniqueness of the store and its products meant challenges and solutions continued to be one of a kind for the two-man team.

Because French Metro often returns to Arkansas with hundreds of new items after a buying trip, none of which are a duplicate, uploading products has been a nightmare in the past. The guys added a bulk uploading option, which became a huge time saver for their clients.

“We could upload the entire inventory from a spreadsheet and it would just automatically create the item on the website,” De Silva explained.

Hunt and De Silva also completely customized the online store’s navigation structure to reflect more searchable terms that also helped optimize French Metro’s SEO. They reduced the number of navigation terms, and instead relied heavily on tags and search functionality. Whenever French Metro’s owners uploaded a new item, certain words in the description would automatically be selected, adding the item to various collections. 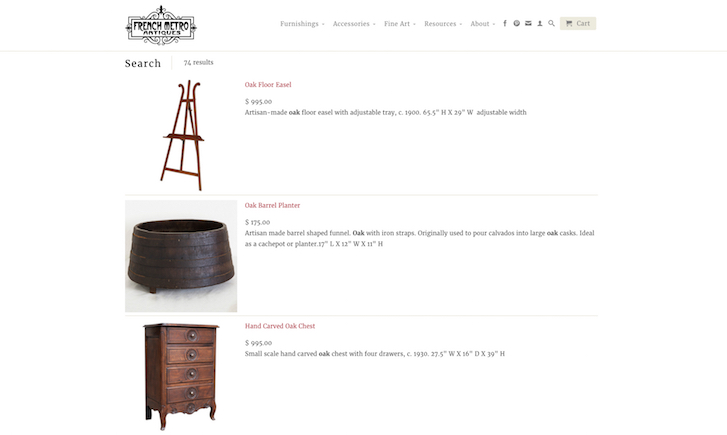 Looking for something from the 19th century? Perhaps you want to search all pieces made of oak? By simplifying the range of terms and the number of collections, De Silva and Hunt made the search function more user-friendly for both their clients and French Metro’s customers.

Finally, Hunt and De Silva created custom buy buttons in the event a product was sold out; a sentence would appear saying, ‘I’m interested in finding a piece like this,’ and an email would be sent to the owners. French Metro does offer personal shopping for certain upscale clients, but with a list in hand of what’s hot with digital shoppers, the couple can now keep an eye out while buying in France.

“Usually for high value objects, it’s a very relationship-based sale,” De Silva explained. “But what we’re doing is opening up a whole new market to people, who would otherwise just search for antiques on Pinterest.” 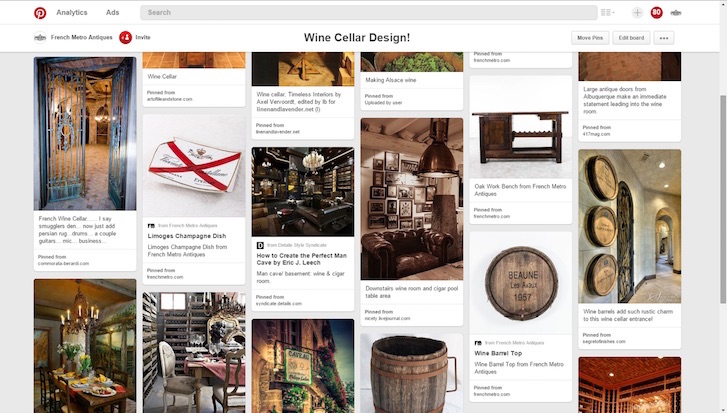 Even if a potential customer was searching for antiques on Pinterest, they can now find French Metro, thanks to Hunt and De Silva; the store has already seen one major sale through the social media site, after a client in New York pinned an antique wine barrel for a wine cellar redesign.

“French Metro really sees the value in selling online,” Hunt added. And, because of the unique and high-end – at times museum-quality – products, buyers are increasingly international.

That’s why Hunt and De Silva saw high value in improving the shipping aspect of French Metro. Currently, the shop ships their antiques all over the United States, and finding ways to easily get clients past the guesswork of how to ship was paramount for the team.

“French Metro sometimes ships pieces that are 9-feet tall, so it’s not like they can just use Fedex,” Hunt said. 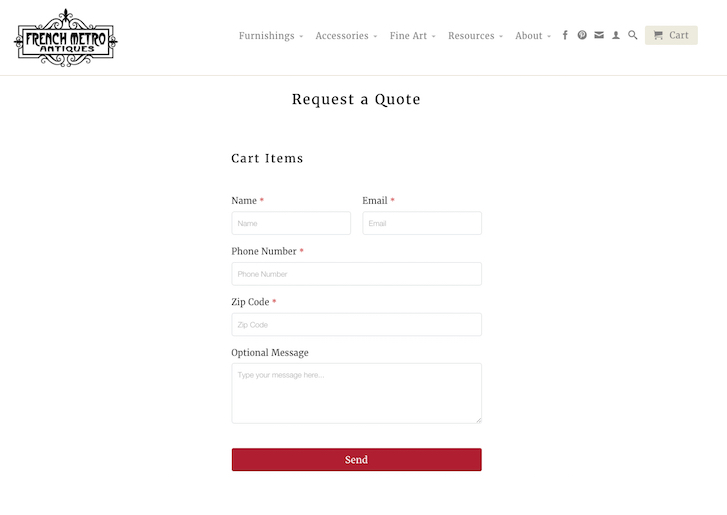 Originally, the company gathered quotes manually from several sources. “We managed to figure out a way with Shopify to use the shipping option but with custom shipping quotes, where clients could request a quote for shipping.”

The customization not only reduces how much energy French Metro’s staff puts into shipping, but also helps better guide customers through the shipping process.

How to train a parent Despite finding solutions in shipping, POS, and search functions, De Silva and Hunt did face one unexpected challenge: training Hunt’s two parents to use their new ecommerce site and all its new functions.

“It was more like addressing their anxiety rather than an actual gap in knowledge. We were kind of psychologists in that way,” Hunt said with a laugh.

Despite being new to the platform, the owners of French Metro caught on quickly with the help of two tutorials, one covering the online side of the business, and the other going over in-store and POS specifically. Hunt and De Silva even did the one-hour sessions via Skype, and Hunt’s parents were Shopify whizzes by the end.

“Because the system is quite intuitive, they feel comfortable playing around with the system,” De Silva added. “We hear stories all the time about how they’ve used Shopify in a new and exciting way.”​