It took them 1,800 cups of coffee and an easy 600 bottles of beer, but the powerhouse team of two behind Hextom managed to pull off a nearly Herculean task:

Develop seven apps in six months (with an eighth currently in development).

Based out of Toronto, Hextom builds apps for ecommerce merchants and launched their first app in July 2015. Today, they boast close to 15,000 aggregate users – 10,000 of which were accumulated in their first four months.

And their most popular app, Free Shipping Bar, is already featured in the Shopify App Store. While Hextom’s list of accomplishments is downright impressive, just as noteworthy is the fact that during the same period of time, they managed to fulfill 68 new feature requests from users on their already existing apps.

For co-founders, Warner Liu and Aaron Lin, it’s not just about quantity, but quality, too; a quality the pair found in their client-base.

“Customer service is as important as software,” Liu explained. “Shop owners are not only looking for solid apps but also customer support around apps.”

Customer service is as important as software.

And it’s not just a one-way street; Hextom provides rave-worthy customer service to their users (just check out their reviews), but they also encourage merchants to give feedback every chance they get. In turn, they use that intel to develop, refine, and reimagine their apps.

It’s a model that Hextom’s team sees as a key pillar to their seemingly overnight success. Warner Liu (left) and Aaron Lin (right) working at one of their favorite coffee shops in downtown Toronto (right around the corner from Shopify’s Toronto offices, no less).

When Liu and Lin decided to try their hand at the startup world, they say they were ready for it... sort of.

“We knew that you’re never really ready,” Liu said with a chuckle.

Lin had already quit his job at BlackBerry to work at another startup company when Liu decided to leave his gig at Amazon. The pair were longtime friends and former colleagues, and had been wanting to start something together for many years. Marrying their varied experience at large companies and small startups seemed like a golden opportunity, which finally took form once they lived in the same city.

When they first started, the guys just met at coffee shops or worked at one of their apartments. To this day, that working model hasn’t changed, with their two-person customer service team working remotely.

In fact, Liu credits their high productivity, in part, to their small-startup mentality around working.

“That’s the beautiful part of a small team, there’s much less operational overhead compared to larger groups,” he explained. “We could concentrate all of our resources on the product.”

Not worrying about renting out a space, buying office supplies, or branding a welcome mat helped Hextom stay focused on what they came together to do; build awesome apps.

When it came to deciding what kind of apps they wanted to build, Liu says it was a very clear decision to focus on developing ecommerce apps.

“We knew ecommerce was the trend; traditional retailers were moving their stores online, so our general direction was to get into the ecommerce field,” Liu explained.

But that seemingly straightforward decision became their first challenge: the developers knew very little about their end users.

“We had to push ourselves and talk to users to get the experience from their side.”

You might also like: 5 Things You Should Look For in an Ecommerce Platform as an App Developer

Whether it’s deciding on what features to include, what app to develop next, or even the price point of each app, the guys behind Hextom feel passionately about keeping the channels of communication open with their end users.

That’s why they rely heavily on feedback (what other f-word were you thinking?).

The team of four now constantly solicits the opinions of its customers using different methods. First, an automatic welcome email is sent every time an app is installed, which encourages customers to contact Hextom with questions or suggestions.

“We found that the Shopify user-community is a very active and engaging crowd. They don’t hesitate to ask us when they get confused,” Liu explained. 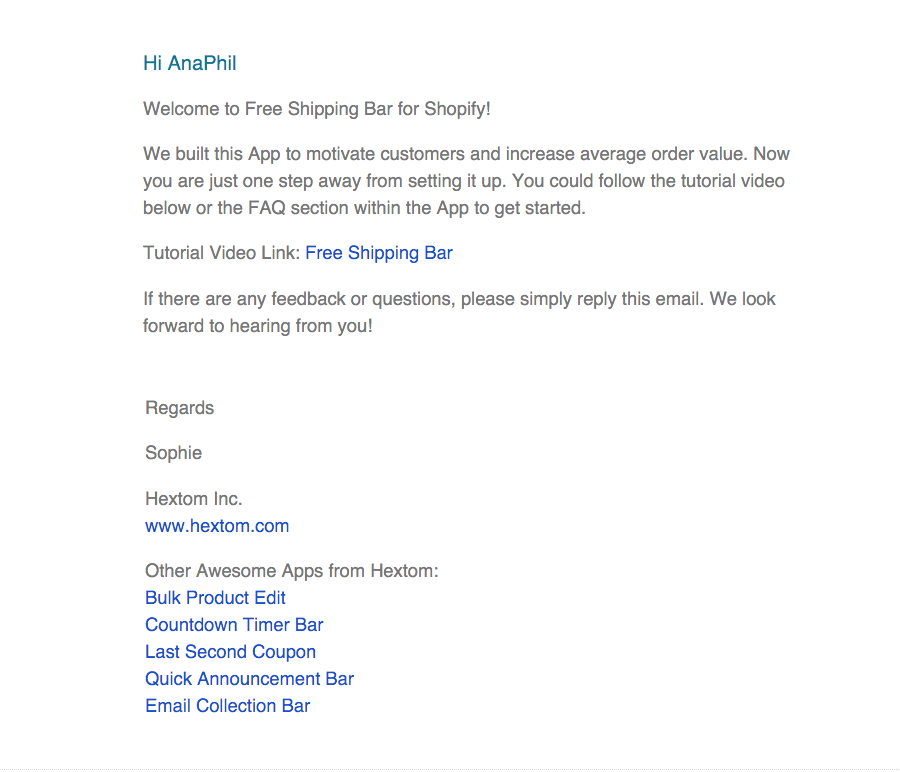 The first email a merchant receives after downloading one of Hextom’s apps is in large part focused on feedback.

After answering a client's queries, the Hextom team will often follow-up with a set of questions on their app’s design and instructional wording. Liu adds one of the big challenges in actively engaging customers for feedback, has been choosing the right language when communicating.

“Sometimes it’s necessary to de-engineer ourselves and write in the language our users are comfortable reading,” Liu said. “We keep the channel open with our existing customers to learn about their pain, struggles, and challenges.”

A screen shot from the first page Hextom users see when they launch the Free Shipping Bar app.

Feedback has become such an important part of Hextom’s business that it’s actually defined as part of their ‘development process.’

“We define developing as a longer phase, not only the first iteration — all the iterations we do are developing,” Liu said.

Using feedback, the team analyzes which part of their apps cause confusion for users, and apply different methods to address and solve problems.

Over time, Hextom has even curated a small group of its most active users by cultivating close relationships. They ask the group for thoughts on what’s missing from the App Store or what features are missing from Hextom's existing apps.

“We prioritize their ideas into our roadmap, giving them screen-shots during our early development [stages], asking their opinions, and how much they think we should charge," Liu said. "They are our ‘Force of Innovation.’”

Overall, what Hextom has learned from months of engaging its users is that simplicity is key. At first, they were developing apps that included every feature under the sun, but they quickly learned, through user feedback, that it wasn’t necessary – in fact, merchants wanted the opposite; clean interface with only vital features.

"Essentially, we build apps to help shop owners solve problems, but if the app is too complicated to use, it’s like solving one problem by creating another one,” Liu explained. “So we try our best to keep our apps simple. That’s what we’ve learned from our customers."

Essentially, we build apps to help shop owners solve problems, but if the app is too complicated to use, it’s like solving one problem by creating another one.

In practice, that simplicity means keeping users on one page when using the Free Shipping Bar app, for example. The app displays a free shipping offer in a slide out bar when customers put more items in their shopping cart and can target certain visitors.

Merchants don’t need to navigate elsewhere to create, edit, or even check the FAQ section when using the app. They can confirm selections, change color combinations, and view the list of bars they’ve already created by scrolling down the Free Shipping Bar’s main page. It may seem like a simple concept, but it’s one that users love.

Hextom’s Free Shipping Bar – all users have to do is scroll down.

"Easy to use is one of the top three things mentioned in the reviews of all our apps,” Liu said.

And simplicity doesn’t mean lack of features; Liu explains it just means being selective about what is included in order to reflect the concrete needs of merchants.

Like how merchants need to test their online advertising and gage engagement rates from different social media sources. That was one comment the Hextom team received from clients, which is how they ended up with their current iteration of the Countdown Timer Bar app.

The Countdown Timer Bar creates urgency by displaying a banner that appears at various times and offers different deals or promotions dependent on where your customer is coming from.

Lin and Liu got the idea for the original Countdown Timer Bar app after reading a blog post on Shopify’s Ecommerce and Marketing Blog that mentioned conversion rates can be increased online when you add a sense of urgency. The first version of the app was a basic countdown timer with a start and end date, i.e “Thanksgiving Day Sale will end in 3 days, 2 hours, and 49 minutes.”

“Because we implemented the timer in a stylish way, it attracted some users who came to us because of the bar’s appearance,” Liu explained.

That initial attraction meant users started sending feedback that addressed common merchant needs. Some said they needed a daily countdown timer that ended at 5p.m., so the guys added it. Others, wanted a countdown every second day instead, or a deal that only appeared every Tuesday; again the developers obliged.

“Each time we added a feature, we learned more about how online marketing is executed and optimized,” Liu explained. “We became more experienced in how to make tools that better help our future Shopify-users increase their sales.”

Later, a group of “marketing savvy” users asked Hextom for a specific feature the duo found downright inspiring. They wanted a countdown timer that specifically targeted only customers from Facebook. Once landed on a merchant’s website, the social-media-specific visitor would see a special timer with a “29 minutes left” message.

“It makes each visitor feel they are just in time to catch a dwindling sale period… it reduces the ‘I will think about it later’ effect,” Liu explained. “This is an even higher urgency, created to have better conversion rates for the expensive traffic [merchants] paid for.”

According to Liu, a common complaint from merchants is that while their Facebook ads do help increase traffic to their ecommerce sites, it doesn’t necessarily mean customers will buy anything.

Countdown Timer Bar supports any social media channel a merchant might advertise on, like Facebook, Twitter, or Pinterest. The app can automatically detect where a visitor is coming from and display the appropriate bar. Merchants who have paid ads on Facebook, for example, can create a bar with a curated timer, and wording specifically from their social media ad.

“They see a countdown timer bar that is in tune with the ads that attracted them. This smooth and packaged experience, on top of the sense of urgency, converts more visitors to paid customers,” Liu said.

Merchants not only get visitors from their paid ads, but the feature also helps generate more revenue, and sees a higher return on investment for social network advertising.

The moral of this #appdev fairy tale?

While the Hextom team wasn't expecting feedback to become such a large part of their business, Liu is quick to suggest it to other app developers, adding that it's worth the investment of time and effort.

"Software is the necessary component, but product service is vital for web-based customers."

The power team of two are currently working hard to get their 8th app complete, and can still be found working out of Toronto-area coffee shops.

Have some of your own feedback on this article? Drop a note in the comments section below.